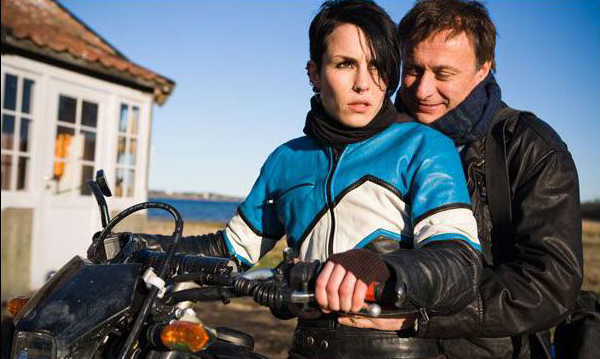 The Swedish actor Michael Nyqvist, who has died aged 56 of lung cancer, became an international star playing the investigative journalist Mikael Blomkvist in the original film adaptations (2009) of Stieg Larsson’s bestselling crime novel The Girl With the Dragon Tattoo and its two sequels. He was a perfect fit for the character; Niels Arden Oplev, who directed Dragon Tattoo, had no doubts casting him, explaining: “He is a Swedish teddy bear, women would feel safe in his arms.”

This was crucial: the Dragon Tattoo’s original title in Swedish was Men Who Hate Women, and both the mystery at the centre of the story and the character of Lisbeth Salander, the tattooed girl (played by Noomi Rapace), are rooted in abuse. Even Nykvist’s character’s name recalls Astrid Lindgren’s boy detective Kalle Blomkvist, suggesting innocence; Nyqvist plays him as a man female viewers would love.

His calm persistence holds together the two sequels, which lack the neat mystery of Dragon Tattoo. The first, The Girl Who Played With Fire, is Salander’s revenge; the second, The Girl Who Kicked the Hornet’s Nest, is a complex political conspiracy thriller; Nyqvist’s understated acting is crucial to their success. Swedes “use thrillers in a different way”, he said. “We never write a thriller like, ‘who is the murderer?’. The big question in most of our thrillers is why.” The three films were subsequently extended and broadcast in 2010 as a six-part Swedish TV miniseries, Millennium. (A Hollywood English-language adaptation of The Girl With the Dragon Tattoo was released in 2011.)

Nyqvist had always moved easily from character acting to leads; now he was adopted by Hollywood as a nuclear madman in Mission Impossible: Ghost Protocol (2011), and then as the memorable Viggo Tarasov battling Keanu Reeves’ eponymous hitman, and stealing the show from him, in John Wick (2014). But he also continued to take the more sensitive roles that had attracted Oplev to him, roles that often involved disturbed family relationships that metaphorically echoed his own.

Nykvist was born Rolf Ake Mikael in Stockholm, but soon placed in an orphanage. When he was a year old he was adopted; his father was a lawyer, his mother a writer. When he was six he learned that he was adopted and was told that his biological father was Italian and his biological mother Swedish. In his 2010 memoir, Just After Dreaming, he explained, “I was not allowed to talk about being adopted when growing up. I walked around feeling like I was going to explode.” In the 1990s, Nyqvist tracked down his biological parents, meeting his mother once for a cup of coffee and then travelling to Florence, where he met his pharmacist father and two half-sisters.

During a year as a high-school exchange student in Omaha, Nebraska, Nyqvist discovered acting, playing in a production of Death of a Salesman. He returned to Sweden to study ballet but soon gave it up to study at the Malmö Theatre Academy. He began acting in theatre, and made his screen debut in a 1982 television adaptation of Strindberg’s Comrades. He moved between the stage and screen until, in 1997, he attracted attention as a detective in the first series of TV films based on Maj Sjöwall and Per Wahlöö’s Martin Beck novels.

His Swedish breakthrough came in Lukas Moodysson’s 2000 film Together, playing a drunken abusive father. He was nominated for a Guldbagge (“Golden Beetle”, the Swedish Oscars), for best supporting actor. He played another abusive father in Dan Ying’s Home Sweet Home (2001) and the following year won the best actor Guldbagge for The Guy in the Grave Next Door, playing a simple farmer in a romantic comedy, and had a leading role in the Swedish TV mini-series adaptation of Henning Mankell’s Wallander novel The Fifth Woman.

His film parts grew more interesting. In Details (2003) he was a publishing editor having an affair with a young novelist. As It Is in Heaven (2004) was nominated for an Oscar as best foreign film; Nyqvist earned another Guldbagge nomination as the famous conductor who returns to the small town of his unhappy childhood and winds up taking over the choir.

Mother of Mine (2005) earned him yet another Guldbagge nomination, and in 2007 in The Black Pimpernel he played Harald Edelstam, the Swedish ambassador who saved many people during the Pinochet coup in Chile. That year he also appeared in Arn: The Knight Templar, an adaptation of Jan Guillou’s crusader novels, reprising his character in a 2010 TV mini-series, and returned to Wallander in another TV series.

After the Stieg Larsson films, he stayed with conspiracies in the US TV series Zero Hour (2013), and returned to Swedish films with one close to his heart, as an amnesiac father being helped by his estranged daughter in My So-Called Father (2014). Nyqvist returned to 1973 Chile playing a cult leader in Florian Gallenberger’s The Colony (2015), an Emma Watson vehicle that was a flop.

In 2016 he was exceptional in Matthew Ross’s independent feature Frank & Lola and in Pernilla August’s adaptation of Hjalmar Söderberg’s Swedish classic A Serious Game. His most recent screen roles include the South African president HF Verwoerd in the Nelson Mandela miniseries Madiba (2017), and he played an Austrian bishop in Terrence Malick’s Radegund, starring Matthias Schoenaerts as a conscientious objector during the second world war, and another Russian in the thriller Hunter Killer, both to be released later this year. He reunited with Schoenaerts in the filming of Kursk, about the submarine disaster, which is still in production.

In his memoir, Nyqvist wrote: “I think the whole mission of being here on Earth is to accept what you have, and my journey was to accept my own life and not pretend anything else. I think that’s what we all struggle with.”

He is survived by his wife, Catharina Ehrnrooth, a film production designer, and their two children, Ellen and Arthur.